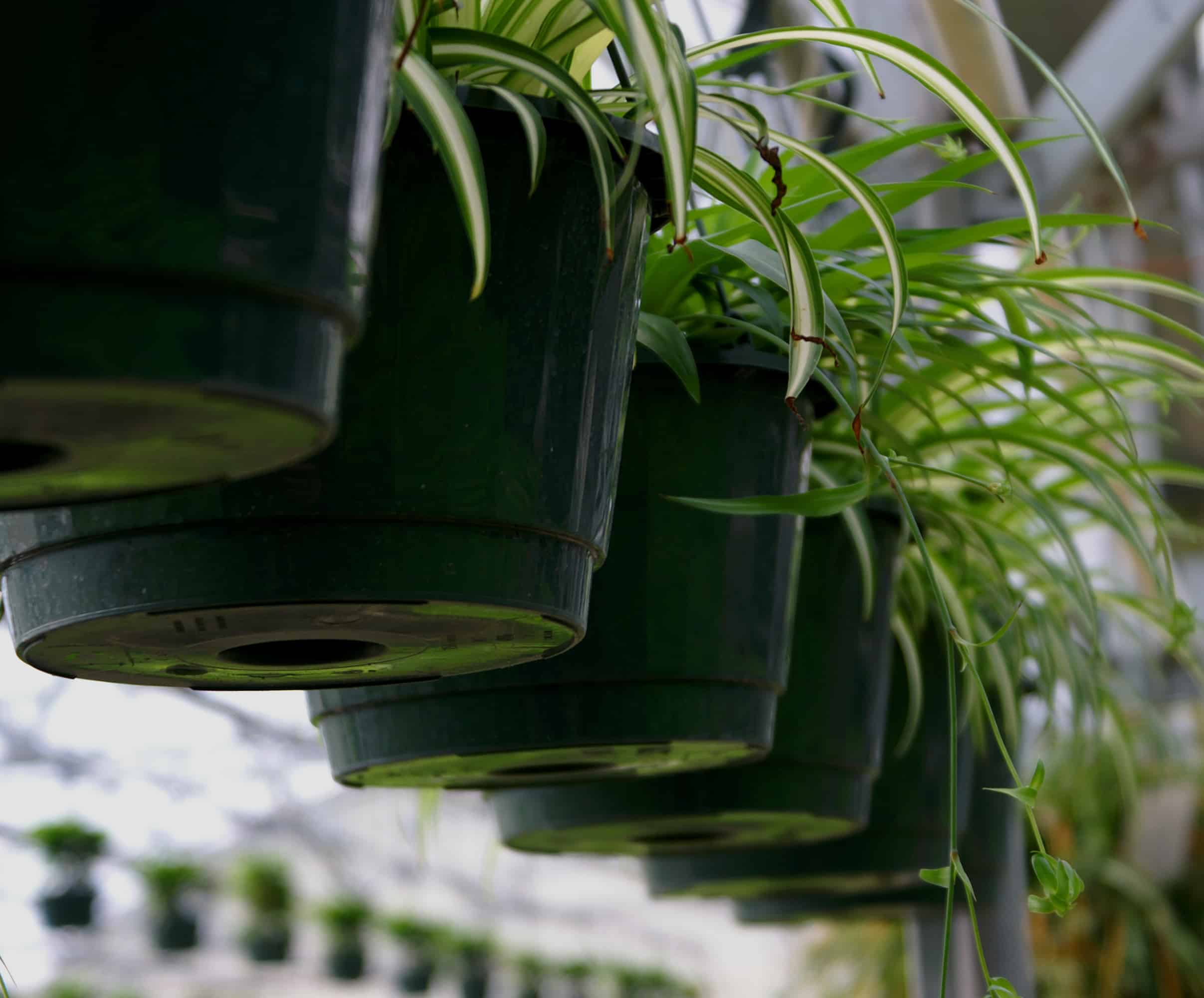 It has been grown indoors for quite a long time and this makes it one of the most popular houseplants. Its leaves usually grow quickly in spring and summer. If you are going to tend to this plant, then ensure that you place it in well-drained soil and in a place where it can receive bright and indirect sunlight.

Its water requirements are moderate. You need to water it only after you have ensured that the soil is dry. Otherwise, the spider plant will end up with root rot.

Generally, it usually produces beautiful white flowers. But compared to other spider plant varieties, this isn’t a tall type even though it grows quite wide.

It’s an evergreen type of spider plant that’s easiest to grow. The variegated spider plant has a green leaf color with white stripes at the center. Its leaves are quite narrow compared to those of other varieties. Additionally, it also produces mostly white small flowers.

Its perfect growing environment is always soil-based with a well-draining mix of potting. Spider plant normally loves a good supply of moisture content and so you should be ready to spritz it with water occasionally to ensure that its leaves are moderately wet.

Besides that, you should keep your potted plant in a place where it can receive moderate but indirect sunlight. It should be noted that this plant doesn’t appreciate hot direct sunlight since it ends up resulting in brown spots and tips.

This ornamental plant with slightly curved leaves is highly adaptive. Even though it loves moisture, it has drought-tolerant characteristics.

Bonnie is simply a charmer. From its name to physical characteristics, you are definitely prepared to deal with one of the most outstanding spider plant varieties. Its curly leaves usually make it the centerpiece of any home, even when it’s placed in a corner. The way the leaves twirl and swirl will leave you looking for more pots for additional bonnie plants.

This curly spider plant has those habits that belong to compact and rounded plants. It has the spider plant’s traditional green color in addition to white stripes for variegation. Its flowering stalks are usually yellow and its plantlets usually curl more than the parent. This makes it ideal for hanging baskets and suitable for compact balconies, bathrooms, and other small rooms.

Generally, it does well when it’s placed in a partial as well as full shade. But if you are going to keep it as a houseplant, then you should place it in a location with indirect sunlight.

Of the spider plant varieties, this one is quite rare to find. The Shamrock spider plant has a solid green color. It perfectly thrives in both indoor and outdoor conditions and usually looks great when placed in a hanging basket.

Generally, Shamrock is quite easy to grow and that’s why it’s a great spider plant for beginners. It has few requirements and this makes it easy to manage. It doesn’t need so much water but needs bright and indirect sunlight to thrive. However, it can still thrive in direct sunlight especially in outdoor conditions although this isn’t a requirement.

This type of spider plant is very easy to grow. It usually produces spider-like shoots with white flowers that are unexpressed. Its leaves have a green center with the margins having a white color. Additionally, the leaves have long arching leaves that grow quickly in summer and spring. Note that its trailing stems normally produce distinct small white flowers that are followed by some tiny plantlets.

A reverse spider is an attractive plant especially when you put it in a hanging basket. This plant usually prefers filtered sunlight or bright indirect light. However, avoid the midday full sun since it will simply scorch and damage the leaves. The perfect growing medium should be a well-drained potting mix.

It bears a close resemblance to its sibling Chlorophytum comosum. However, it doesn’t have the hanging characteristic of comosum. Its appearance features sharp and narrow leaves with a solid green color. Spider Plant Chlorophytum usually produces white star-shaped flowers. This makes them perfect additions to any indoor space.

Its optimal growing condition features moderate light with indirect sunlight exposure. It requires moderate watering that mostly depends on the external temperatures and the soil’s dryness.

Note: while the flowers might appear like those of other spider plant varieties, capense’s flowers don’t hang but instead sprout straight.

It’s an attractive cascading houseplant. Ocean spider has leaves with a beautiful green center that’s surrounded by a creamy white margin. When it blooms it produces white small flowers while its stem usually grows long and narrow to form what’s often known as runners

Just like most spider plants, comosum Ocean needs bright and indirect sunlight. Note that while it’s still good at tolerating some shade, its growth rate will slow down and the plant will end up losing its stripes. During the initial growth period, ensure that you water this plant occasionally. But once it’s fully developed which is usually within a year, you should water it moderately. This low-maintenance spider plant normally looks great when placed in a hanging basket.

The Atlantic spider plant has its origins in Asia and South Africa. Most people usually keep it indoors due to its air-purifying benefits. Besides that, it’s an attractive plant that fit a wide range of indoor space. In terms of appearance, it has beautiful white-ribboned foliage with a distinct spider green margin.

This is a plant variety that’s easy to maintain.it only needs a moderate amount of indirect sunlight and moist soil throughout the year. It often looks nice when it’s grown as a hanging plant.

Just like its name already suggests, this is a variegated version of the Bonnie spider plant. it’s generally the perfect addition to any living room thanks to its refreshing appearance. It’s quite groovy and tends to grow quickly during the warm and hot spring/summer season. Its green leaves feature creamy white stripes that make them attractive centerpieces in most homes. With its curled leaves, Bonnie Variegated often looks great when it’s grown in a hanging basket.

Its fast-growing nature in addition to easy care requirements has made it a popular choice for beginners. This is a versatile and “friendly” plant that needs an adequate supply of indirect sunlight and good moisture content. Besides that, you can also pair it with other Dracaena plants.

It’s an annual spider plant variety with fast-growing tendencies. Violet Queen is quite different compared to other varieties. This is because it has palmate green and aromatic leaves. Its rich violet flowers normally produce a refreshing and captivating fragrance.

The purple spider plant needs full sun as well as well-drained soil for it to thrive. Its water requirements are minimal and this means that it can survive different climatic conditions. Unlike most spider plants that produce stunning flowers in summer, purple spider grows and thrives at its own pace. That’s why it produces beautiful flowers during the cold season.

It derives its “Mandarin” name from its orange-like stems. It’s one of the most colorful plants of this species. Its colorful and attractive orange stems in addition to shiny green leaves make this plant a stunner. Besides that, it has an extremely tall height compared to other spider plants.

Even though it’s an eye-catcher, the Mandarin plant has quite low maintenance requirements. It needs partial shade and indirect sunlight for it to do well. Additionally, it needs a moderate level of water supply.

It’s a graceful charmer with a stunning appearance. The Hawaiian spider plant isn’t similar to its close relatives. It has leaves with unique variegated patterns that are usually distinct while the plant is still young. Initially, you will notice that it has bright white and cream leaves when the plant is young. However, this color will gradually transform to light green and as the plant maturates and the variegation deepens, the leaves’ color will turn to deep green. Its growing requirements are moderate and you simply need indirect but bright light with occasional watering. 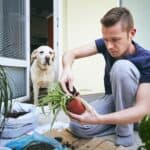 Are Spider Plants Poisonous to Dogs? 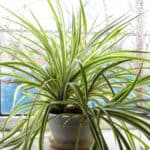 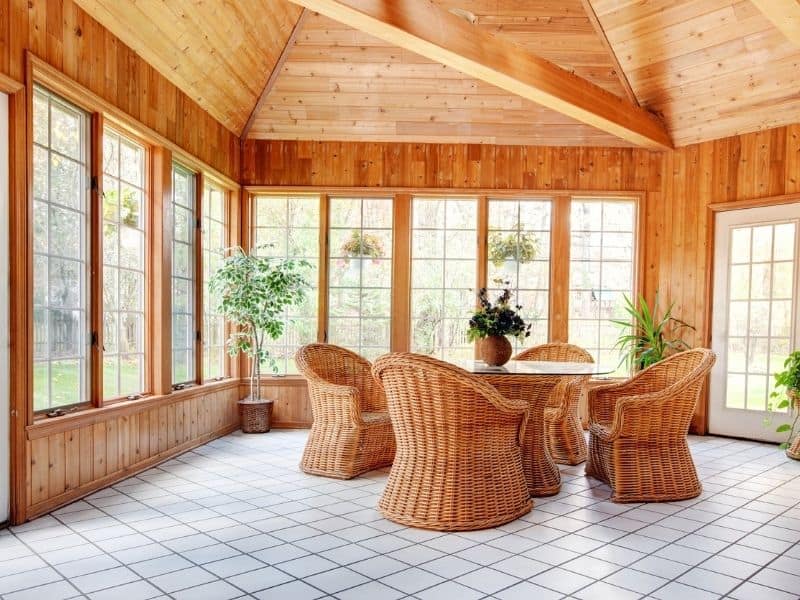 9 Best Plants For A Sunroom

If you are trying to put together the perfect sunroom then you are going to need to make sure that you have a great plant selection. The plants you choose for your sunroom will depend on exactly how much sunlight the room gets, how you will be arranging the plants, and if you like high… 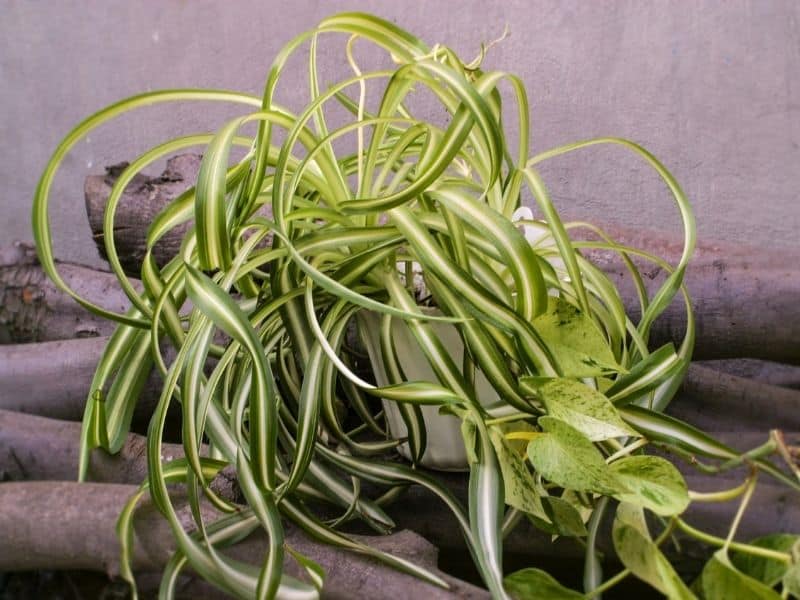 Nearly everyone loves having a house plant, although some people have better luck with them than others. Bonnie spider plants are one of the most popular varieties available on the market. However, is a Bonnie spider plant the same as a Curly spider plant? Let’s take a closer look. Are Bonnie Spider Plants the same…